The Mountains Are Calling – 5 Days in Queenstown, New Zealand

Over the last few years, I have been fortunate enough to travel the world, visiting numerous countries. But of all I’ve experienced the past 5 days that I spent in Queenstown, New Zealand will some of the most memorable. 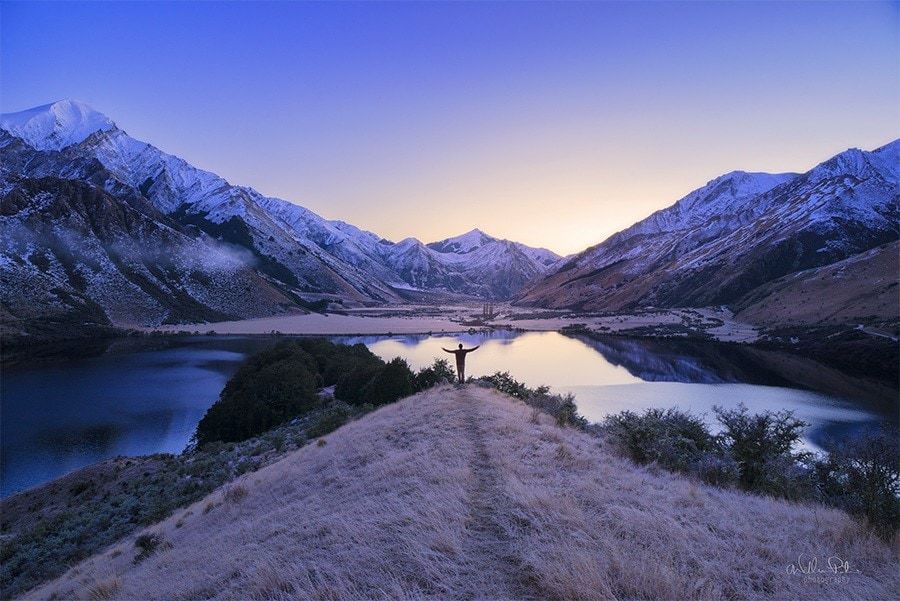 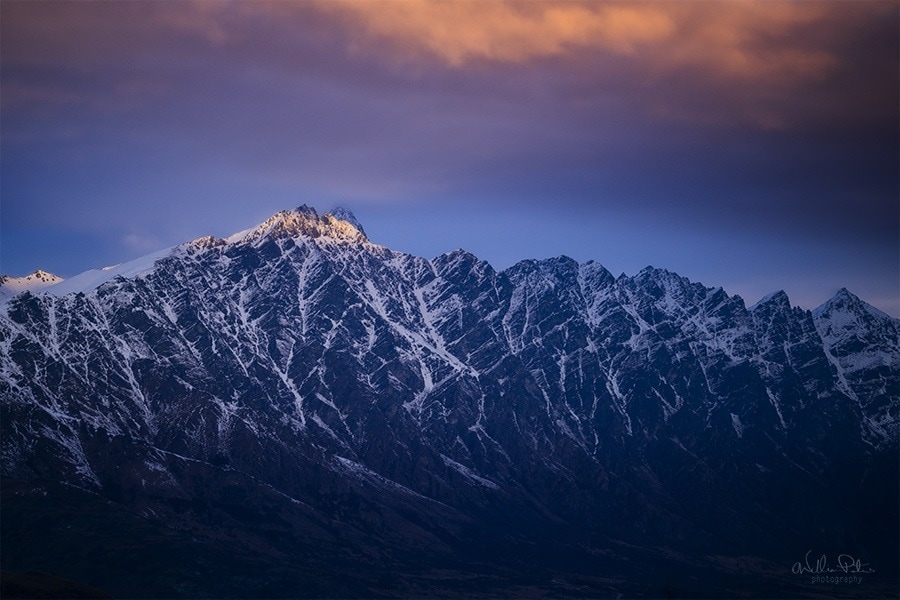 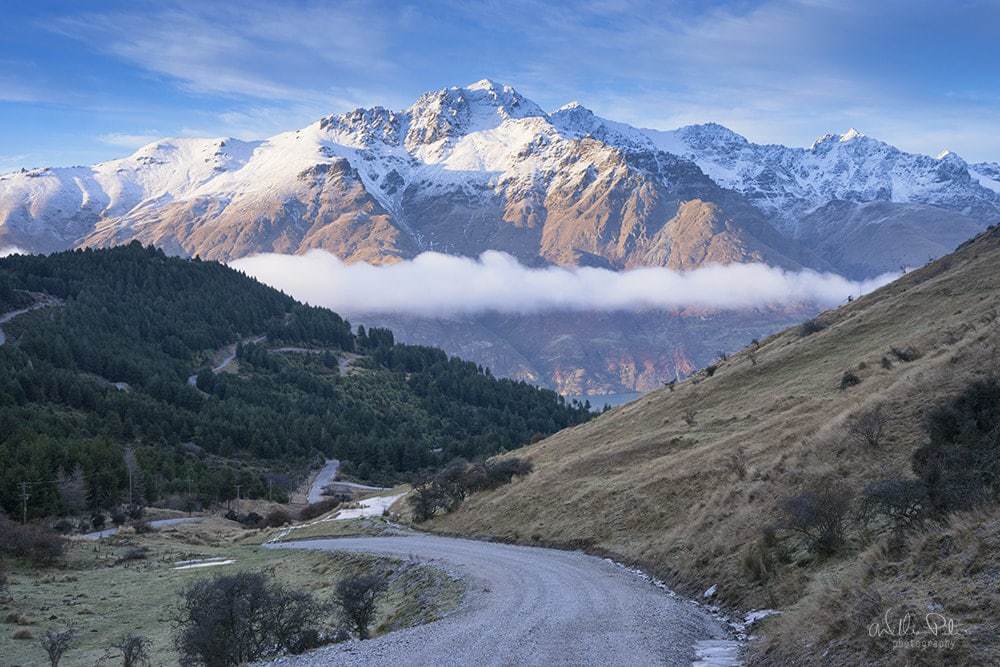 Living by the ocean in Australia the sight of towering mountains is foreign. In 2013 I experienced for the first time what it’s like to photograph earth’s natural skyscrapers when my wife and I visited Yosemite and the Canadian Rockies. Although separated by miles of ocean, New Zealand’s mountains have come to feel like home for me. So I was stoked to be offered the opportunity to return to NZ on a campaign for Destination Queenstown.

I don’t think any photograph will do justice to the sheer size and might of some of the peaks that comprise this land. This was my first winter in the mountains and I would have to say it is truly the best time to see them. My previous work in NZ involved a lot of traveling however this time, being stationed  just in Queenstown meant I was finally able to really absorb being in the presence of the towering peaks.

I soon discovered that Queenstown is the perfect location for alpine photography despite it being more commonly known for its ‘extreme sports’. During our 5 day campaign, I would look out my window of The Sherwood each morning and pinch myself as I took in the overwhelming sight of The Remarkables and 360-degree views of surrounding mountains. 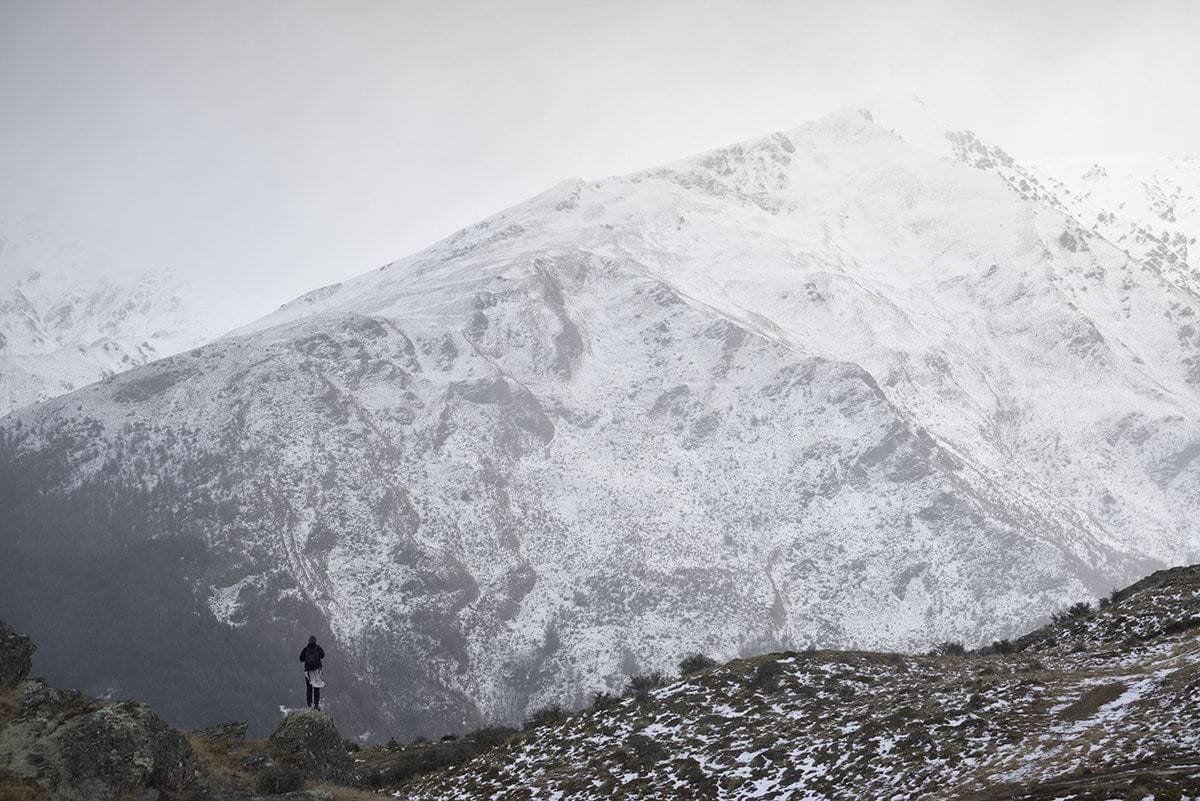 A man standing before snowy mountains in Queenstown New Zealand.

Exploring these landscapes with fellow photographers Woody, Mark and Nick not only made this campaign incredibly fun but also meant they became subjects for irresistible ‘hero shots’, helping give some much-needed scale to the monstrous surroundings which dwarfed us. 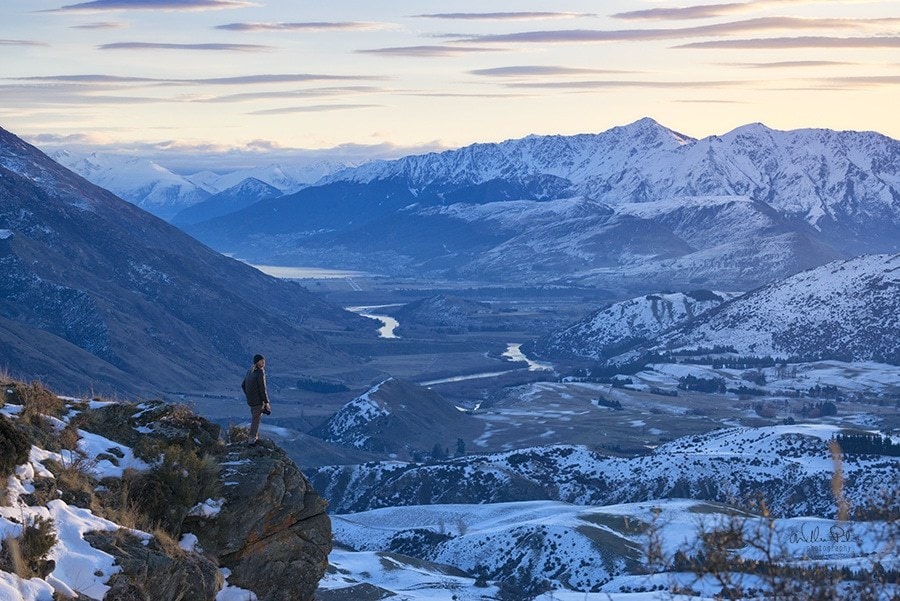 Although early winter morning conditions can be uncomfortable, there’s nothing like the sound of crisp ice crunching underfoot and the sensation of fresh alpine air entering your lungs. Shooting pre-dawn in minus zero temperatures is almost like a love-hate relationship where no matter how brutal it can be, you just can’t help but keep coming back for more.

The weather changes fast here and on an afternoon hike we found ourselves out in the open, elevated high above sea level. A distant storm threatened to blow in from the south and within 15 minutes of first spotting the clouds, Woody, Nick and I found ourselves running for shelter as gale force winds and horizontal rain buffeted us on all sides. It was at this point I severely regretted not wearing several more layers and some gloves. I couldn’t stop thinking about my warm jacket hanging up in the comfort of the heated apartment. 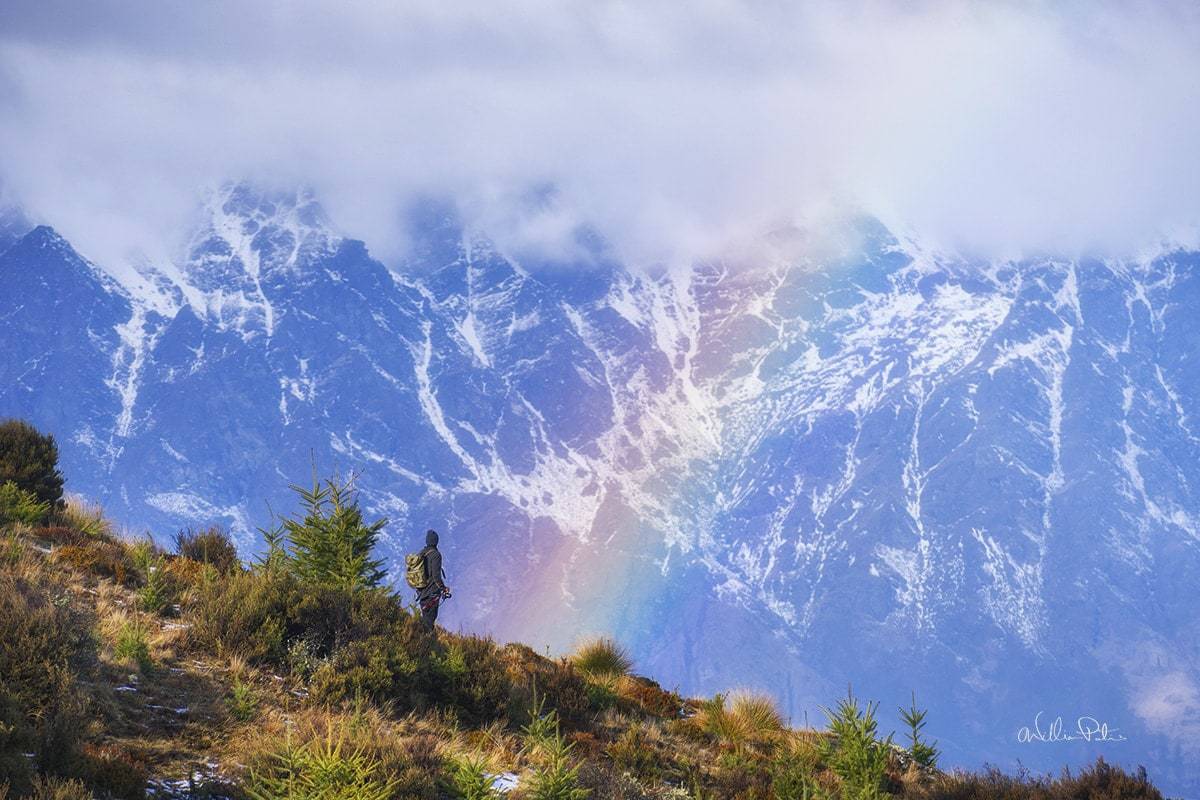 The Remarkables and a rainbow in Queenstown.

Out of desperation I momentarily hid behind a large stone which did absolutely nothing, so we decided to run (and slide) back down to the safety of the forest below. However, after only a few minutes (which felt way longer), a handful of small gaps in the sky began to appear. In true NZ fashion, the next 20 minutes then turned into a spectacle of dramatic light, rainbows and hysteria. Just another day at the office in New Zealand. 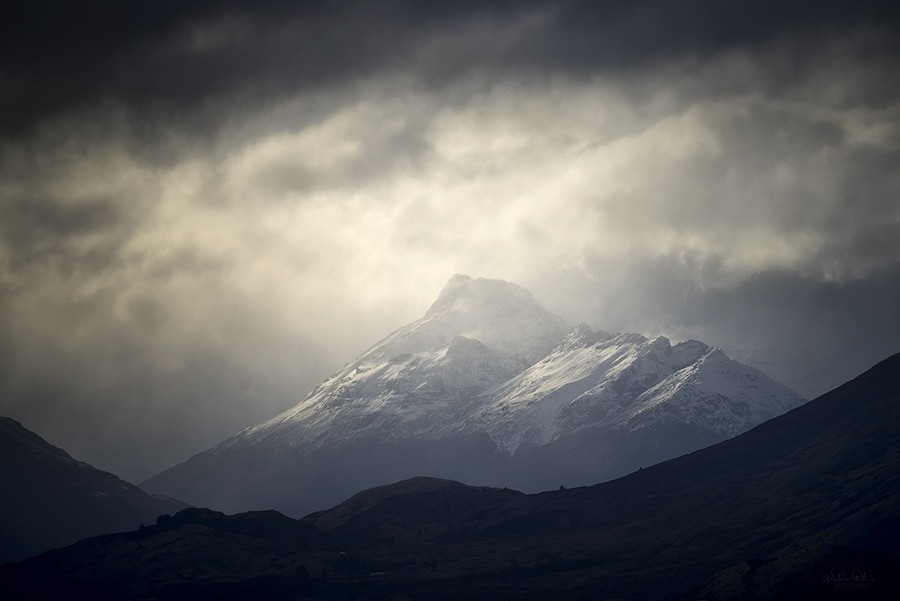 A mountain breaking through the storm in New Zealand. 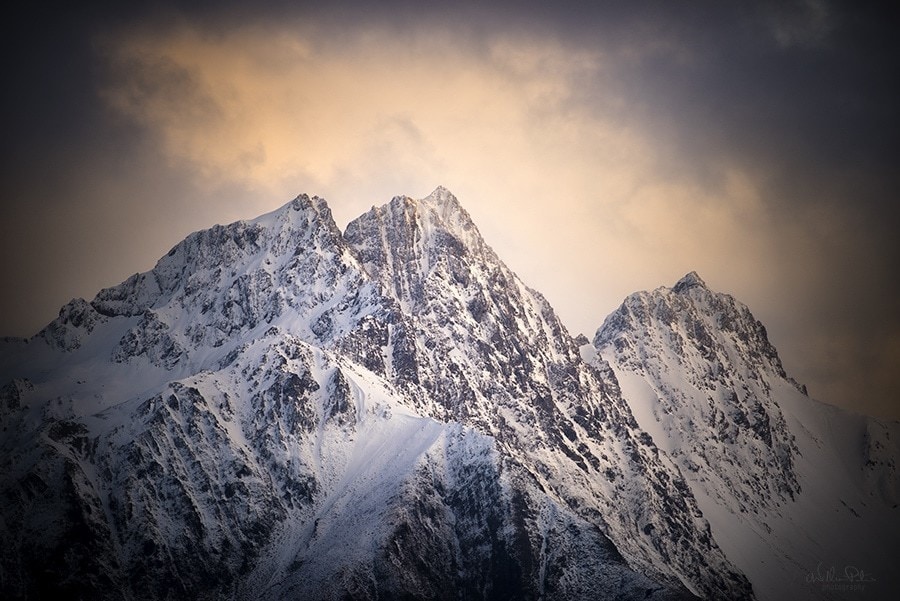 I don’t think I will ever be able to do justice to the beauty of these mountains, there is something about them that words or image can’t explain. I know that this unexplainable feeling will continue to haunt and drive me back into the presence of these giants for the rest of my life.

Thank you Destination Queenstown and the amazing crew I worked with for such an awesome opportunity. WP 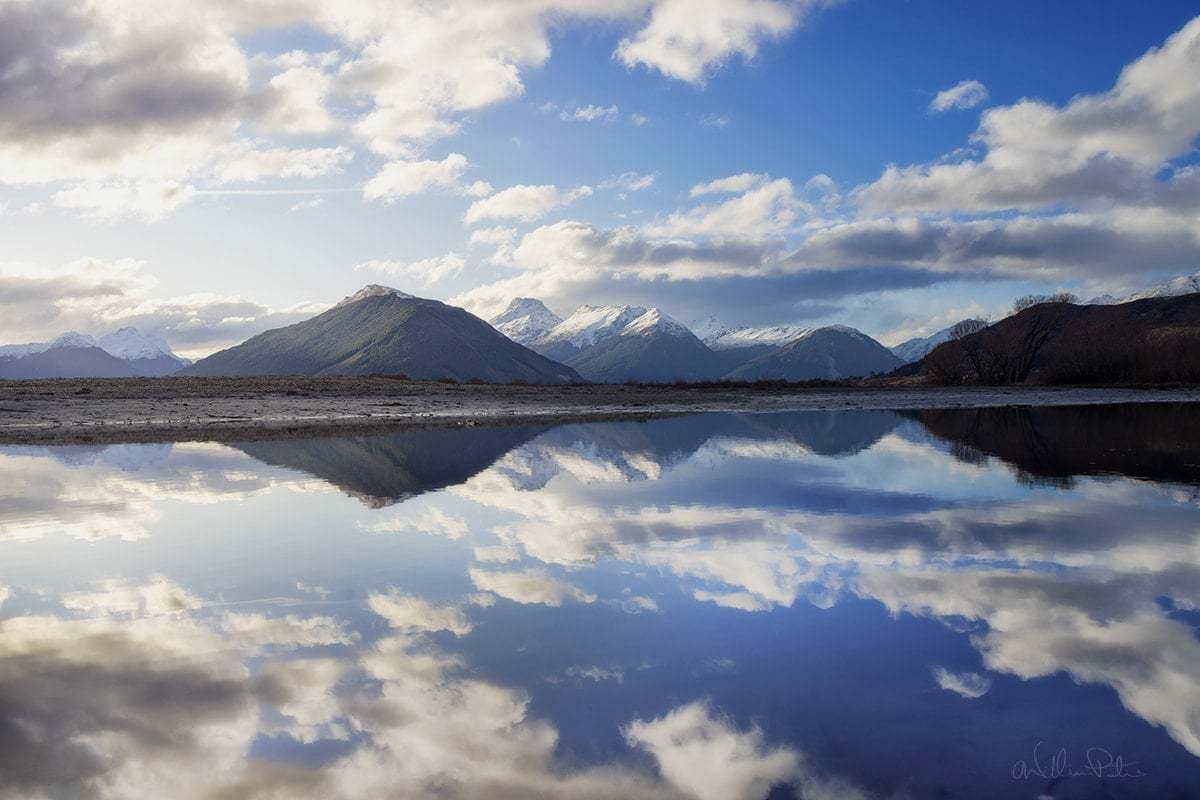